March 22, 2008
This first year back into the money making side of my artwork is going to be quite heavy on the capital investments. I guess next year I’ll keep some of my profits or take my family on a nice vacation. I probably should save for tuition payments. Years and years and years of tuition payments. I should say it’s my first year back into traveling around and making new friends while playing with fabric together. The money is a very fun side benefit.
I’ve decided I need to go digital. Most of the techniques I demonstrate in my classes are up-close by hand things. Caryl Bryer Fallert was the first teacher I saw demonstrate something with a camera and projector so that everyone in the room had a great view of what she was doing. She’s always on the cutting edge of the technology curve.
I’ve been reading so many reviews that my head was spinning and finally decided to give up on that and go straight to the people who have given me much of my quilting education over at the QuiltArt mail list. As usual, someone had the information I needed. I try, I really do, to do lots of research on my own but almost always end up just following the recommendation of someone who has already done the same thing.
Marilyn Bedford loves her InFocus.
Elizabeth Spilker loves her Sony VPL-ES1
Jane Davila loves her Hitachi CP-X253
The best information came from Jane who said that the folks over at the Projector People
have the best customer service available. She was right. I called and asked questions. Then called and asked more, and more and more!
They know their stuff and are used to dealing with people like me who don’t.
Through Jane’s wonderful information and her people I learned:
LCD is much better than DLP for those concerned with color accuracy
Set your computer’s resolution to the same res. as your projector
Minimum lumens = 2000, minimum contrast ration = 400:1
Get the right cords for your laptop
Some projectors can present with a usb thumb drive rather than your laptop but it wouldn’t work with  my Mac.
I decided that my priorities were:
great looking pictures for my lectures
portability
good enough for lit classroom demonstrations
and the winner is…..(drumroll) 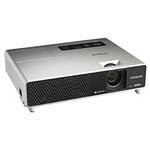 The Hitachi CP-X253 .
Like I said. I just ended up giving up on more research and going with a strong recommendation. 3.9 lbs and a great picture. We shall set it up this week and play.

For Your Inspiration: Chihully pt 1

thank you for your order