February 5, 2012
We recently watched a documentary called “The Pixar Story.” Lots of great information about John Lasseter and Steve Jobs and all of the creative people who work at that studio. I have to admit that I truly LOVE pretty much every picture they’ve created and would watch them all even without kids. my favorite is definitely “The Incredibles.”

I recently ran across some creative wisdom from Mr. Lasseter here and thought I’d share it with you a bit at a time over the next few weeks.

1.  Never come up with just one idea
“Regardless of whether you want to write a book, design a piece of furniture or make an animated movie: At the beginning, don’t start with just one idea – it should be three. The reason is simple. If a producer comes to me with a proposal for a new project, then usually he has mulled over this particular idea for a very long time. That limits him. 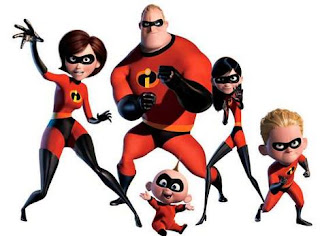 “My answer always reads: ‘Come again when you have three ideas, and I don’t mean one good and two bad. I want three really good ideas, of which you cannot decide the best. You must be able to defend all three before me. Then we’ll decide which one you’ll realise.”
“The problem with creative people is that they often focus their whole attention on one idea. So, right at the beginning of a project, you unnecessarily limit your options. Every creative person should try that out. You will be surprised how this requirement suddenly forces you to think about things you hadn’t even considered before. Through this detachment, you suddenly gain new perspectives. And believe me, there are always three good ideas. At least.”
I love this. Don’t get so close and focussed on the one piece you are working on now – or don’t get obsessed with one little part that you loose sight of the whole.
What other ways can you think of to apply the “more than one idea” to your work as an artist.

Here is the rest of the series:
1. Never come up with just one idea
2. Remember the first laugh
3. Quality is a great business plan. Period
4. It’s the team, stupid
5. Fun invokes creativity, not competition
6. Creative output always reflects the person on top
7. Surround yourself with creative people whom you trust