Sisters: The Shape of Love

August 6, 2010
I’d like to introduce you to three of my favorite people in the whole, wide, entire, planet.
Maybe the galaxy. 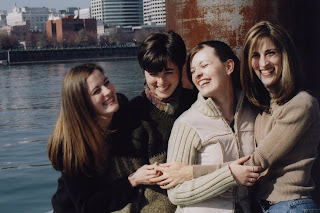 I get to go spend time with them next week and I am beside myself with excitement. 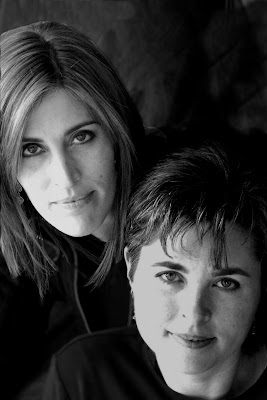 I’m the oldest. Lisa came along a couple of years later. We shared a room our entire childhood. There were times we were best friends and other times we merely coexisted. Pretty much amicably.
She got married soon after I did and never traveled much so our grown-up relationship depended on a few phone calls here and there. I’ve always admired her for her bravery, endurance, and her faith. Now she’s making up for lost travel time – can’t wait until she finally gets to come visit me.
She has the most beautiful voice. She’s always been very talented. She could draw, back when I only secretly wished I could. Then again – she practiced and I didn’t. Of course she learned to draw. She has always been beautiful.
She has a smile a mile wide, lets her hairdresser do anything he feels like doing, and loves being just a little bit insane. I love her. 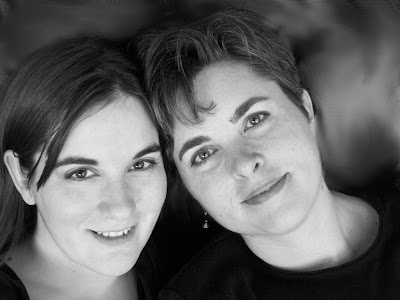 Amber is ten years younger than me. I don’t think she was out of elementary school when I went away to college so I didn’t really get to know her as a friend until much later when she got to come visit, then live with us for several months.
I’ve always seen her as someone who thinks and feels things very deeply, who seems to know what she wants and is willing to work to get there. And the things she wants are beautiful – making the world a better place.
She plays piano amazingly well, sings, dances, and just this week earned her masters of music education. 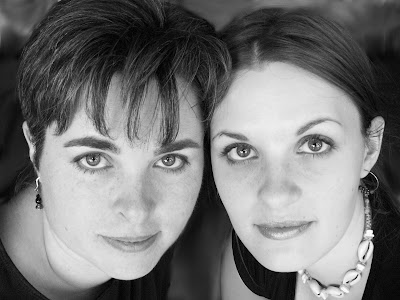 Lindsey was only 6 years old or so when I moved out. She’s always been a little nuts – in a good way. Very silly, very confident, very outspoken. Fearless. I think it comes from having nine people doting on you from the time you were born. (Parents, Grandma, five sibs – yup – two brothers in the middle.)
I remember coming home for a visit after a couple of years living across the country (this is pre-e-mail) and being sent to pick her up at school. This gorgeous blond was sitting on her violin case on the curb. I didn’t even recognize my own sister. I tried not to cry.
She plays violin, designs and creates beautiful jewelry, and still makes me laugh. 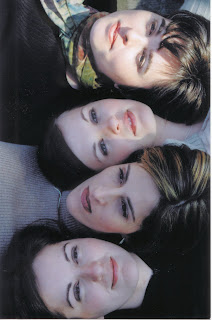 These women are people I admire, respect and love. They live much, much, too far away. Of course I was the first one that took off across the country – far from home. Now we are scattered from coast to coast. Nobody in my family lives closer than 7 hours from each other.
We’ve had two “sisters” trips in our adult lives. We always sing. The three of them are involved in musical theater. I’m the hack among ’em but if I do say so – we sound pretty cool. Sometimes we sing goofy camp songs. Sometimes English madrigals. Last time we learned some early american folk songs. I’m bringing along some Andrews Sisters charts.
We always spend a day dressing up and playing with our cameras. This photo is the basis for one of my favorite pieces. Some time soon (which for me is any time in the next five years) I’m going to work up a very long series of artworks based on our relationships.
So you’ll understand if I’m a bit distracted. Kind of like a puppy dog with two little tails to wag I’m so giddy with anticipation. I’ll try to post some pictures. I am truly blessed to have these women in my life. We talk and skype all the time now but we only get to see each other every few years. It’s not enough. 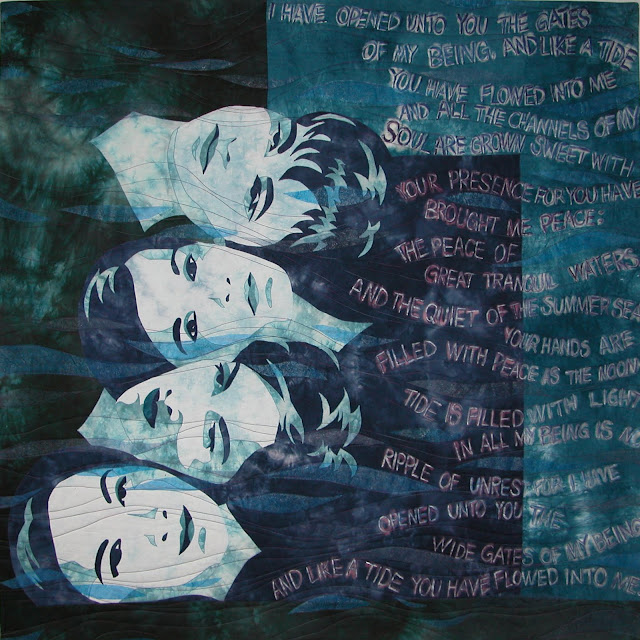 Sisters: The Shape of Love
51″ x 51″
2005 by Lyric Kinard
Psalm to By Beloved by Eunice Tietjens
can be read in its entirety here

Join me in at the international quilt festival!

For Your Inspiration: Upcycled Sweaters